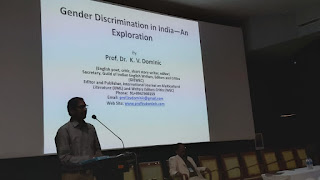 Dowry system is another curse of the Indian society. Dowry deaths are deaths of married women who are murdered or driven to suicide by continuous harassment and torture by their husbands and in-laws over a dispute about their dowry, making women's homes the most dangerous place for them to be. Dowry deaths are found predominantly in India, Pakistan, Bangladesh, and Iran. Twenty-one dowry deaths are reported across the country every day. The conviction rate, however, is less than 35 per cent.

I composed a poem on the curse of dowry system which was published in my first collection of poems Winged Reason in 2010. The poem is entitled “Laxmi’s Plea”. Let me read it:

Rekha’s wedding today;
my youngest colleague
junior by ten years.
To be or not to be;
present or absent;
a terrible trance!
Auspicious occasion;
jocund jolly hall;
a fish out of water;
I can’t slither there.
“Laxmi, when is your wedding?”
“Laxmi, you alone remain.”
Can’t bear these arrows;
heart full of such arrows;
bleeding day after day.
It’s none my fault
single at thirty three.
“Laxmi looks very handsome.”
“She is a lamp to any house.”
A lamp destined to burn out
under a hot pot.
Plenty of proposals;
appeared with tea
before many young men.
None complained my looks.
“What’s the dowry?”
A stumbling block to all proposals.
Father died when I was ten;
mother bed-ridden with cancer;
a thatched house in five cents;
an elder sister married off.
My meagre salary two thousand
hardly meets our food and medicine.
I have pricked my bubble of dreams;
let none dream for me.
Leave me alone;
leave me single.
Gandhi believed that the custom of dowry turned young girls into mere chattels (commodities) to be bought and sold. He called this custom pernicious as it lowered the status of women; destroyed their sense of equality with men and defiled the institution of marriage. (Bakshi 175) To curb the venomous dowry system he advised every parent to educate their daughters so that they refuse to marry a young man who wanted a price for marrying and would remain spinster than to be party to the degrading terms. He suggested that a strong public opinion needs to be formulated against dowry and such young men who soil their fingers with such ill gotten gold should be excommunicated from society. He advocated change in education and also stressed the need of taking recourse to radical measure like organizing youth movements and offering satyagraha against those perpetuating the custom. (Gandhi, Woman’s Role in Society 32)
The destiny of widows in our country is very pathetic. India is home to an estimated 40 million widows - approximately 10% of all women. Ageing women are more vulnerable than men. Without any financial security or welfare infrastructure, many of them are abandoned in Vrindavan--where they live off charity while they wait to die. Farmer suicides, communal riots, terrorist attacks, road accidents etc. increase the number of widows in our country. I wrote and published a poem entitled “I am an Indian Young Widow” in my fifth poetry book Cataracts of Compassion in 2018. Let me quote from it:
I am an Indian Young Widow

I am an Indian widow
Cruel destiny made me so
at my prime age of twenty nine
With neither notice
nor any prior hint
he left me and our little ones
. . . . . . . . . . . . . . . . . . . . . . . . .
Alas I have to row all alone now
And sea has become more violent
No glimpse of any terminus now
With none to help from both our families
how will I survive with my little ones?
I who opposed practice of suttee
can now find sense behind its concept
Hellish is the life of an Indian widow
Tragic and nightmarish if she is young
Patriarchy doesn’t allow her to survive
Eagles fly over her wherever she goes
When she craves for love and sympathy
society rends her bleeding heart
shooting arrows of repulsive words
Curses hurl on her from in-law’s house
Burden for her parents and brothers
Looking at her husband’s photo
whines often for deserting them
Pleads him to take with him
In fact she rows not for saving her life
but to save her children from being drowned.
Another major chain of Indian women is that they have no freedom in choosing their dress. Their dress code is decided by the patriarchy, particularly religion. Men have the freedom to wear any dress they like but they dictate the attire of women. Gandhi regarded purdah as inhuman and immoral, for it impeded the march towards swaraj (self rule) by restricting women. (Bakshi 174-175) It denied women freedom as well as free gift of God like light and fresh air. It also crippled the free movement of women; interfered with their advancement and their capacity for doing useful work for the society. It weakened instead of strengthening morality for it did not help in preserving chastity as chastity is not a hot-house growth and cannot be superimposed. (Gandhi, Woman’s Role in Society 22) It cannot be protected by the surrounding wall of purdah. It must grow from within and must be capable of withstanding every temptation. Men must be able to trust womenfolk as the latter are compelled to trust them. He believed that the veil generates the feeling of insecurity in women and results in deterioration of their health. He appealed to public in general and women in particular to tear down purdah. (Gandhi, Women and Social Injustice 96) He was sure that abolition of purdah would lead to mass education for both men and women and would help women in gaining strength and becoming an active participant in the struggle for swaraj.
According to the National Crime Records Bureau of India, reported incidents of crime against women increased 6.4% during 2012, and a crime against a woman is committed every three minutes. In 2011, there were greater than 228,650 reported incidents of crime against women, while in 2015, there were over 300,000 reported incidents, a 44% increase.
Extreme poverty and lack of education are also some of the reasons for women’s low status in society. Poverty and lack of education derives countless women to work in low paying domestic service, organized prostitution or as migrant laborers. Women are not only getting unequal pay for equal or more work but also they are being offered only low skill jobs for which lower wages are paid. This has become a major form of inequality on the basis of gender. (“Gender Inequality in India”)
According to the Deloitte report titled “Empowering Women & Girls in India for the Fourth Industrial Revolution”, 95 per cent or 195 million women are employed in the unorganised sector or are in unpaid work. Women are discriminated in the labour sector with regard to the wages. They are paid lesser than the wages of men even if both are doing the same quantity of work. Among the majority of the poor people in India women are the bread earners of their families. They have to do all the domestic activities and then go for work in factories, estates, and other work places. Men, husbands and sons, either live idle or squander the money they earn through labour. Many are addicted to liquor and drugs and they beat and torture the women and children in the houses out of intoxication. Some even steal the hard-earned money of the women for their drink.
Discrimination to women in sports and games is more visible in our country than the West. Spectators are very less for women’s games. Cricket, as you are aware, is the most popular game in our country. Players of our Indian Women Cricket team get very less remuneration compared to the men. They have no sponsors at all while the leading men players of our country earn millions and millions of rupees every month. I have composed a poem on this discrimination and published it in my third collection of poems entitled Multicultural Symphony in 2014.  The name of the poem is “Women’s Cricket World Cup 2013”. Let me read it.
Women’s Cricket World Cup 2013
I.C.C. Women’s Cricket World Cup 2013
Played in cricket crazy land of India
Opening match at Brabourne ground, Mumbai
Indian lasses meeting West Indian lasses
Live telecast from Star Cricket
What a shame! Empty galleries!
Had it been men’s world cup
galleries full and thousands ticketless outside
Why such discrimination to women’s sports?
Why such double standards to women’s feats?
Had it been women’s beauty contest
or fashion show with minimum dress
the stadium would be full
even if tickets are very high
Dear my brothers in India and abroad
let’s appreciate and promote
our sisters’ talents and skills
rather than looking at them
with vicious hungry eyes.

We have so far examined the impact of gender discrimination in our country. As I have stated earlier this unhealthy attitude and practice have been there throughout all the ages of India. We naturally expect a change or reformation in the society after our independence. Being a democratic country the constitution was formulated in such a manner ensuring equality for women. But even after 73 years of independence what is the position of women in our country? In the 17th Lok Sabha 2019 there are only 78 women representatives out of the total number of 542, with a low percentage of 14.6%. Out of the 236 Rajya Sabha members only 26 are women, just 11%. The Women's Reservation Bill or The Constitution (108th Amendment) Bill, 2008, which proposes to amend the Constitution of India to reserve 33% of all seats in the Lower house of Parliament of India, the Lok Sabha, and in all State legislative assemblies for women is still a pending bill in the Parliament of India. No doubt, the male parliament members of both the Lok Sabha and Rajya Sabha are opposing the bill’s implementation. Women representation in the State legislative assemblies is also very low and nominal.
Thus it is very clear that as long as patriarchy rules supreme in our country women will never get justice. Unless women fight against this male supremacy by boycotting elections and resorting to Gandhian ways of satyagraha this gender discrimination will never disappear from India. I am winding up my paper with an extract from my poem “International Women’s Day” published in my first collection of poems Winged Reason in 2010.           .
“International Women’s Day”

Woman is the game!
Birth to death,
an instrument of lust
and hot-selling sex.
Her very birth ill omen:
an unwelcome event.
No guilt in foeticide;
foeticide is matricide;
no life without mother.
Sexism in childhood;
priority to her brother;
her food, his leftover.
Chained in kitchen,
she rarely goes out.
No toys, no plays;
always envies him.
Mum and dad love him;
she gets only reproaches;
beat her very often.
Seldom educated;
hence no employment,
and always dependant.
No choice of her partner;
her individuality
scantily respected.
Born to be dictated;
tyranny everywhere:
slave to her husband,
servant to her in-laws.
Bears the burden of birth;
lives for her children.
Dawn to dusk,
blood turns sweat.
Her love never returned.
Has no place in politics:
councils, assemblies, parliaments,
she has little or unheard voice.
Religions also dishonour her:
she has no right
to enter her Father’s abode;
no place in clergy.
She is always the Other.
Patriarchy is his product;
he dictates the world;
dictates even God,
and corrupts religion.
He writes scriptures,
makes sexism predestinate.
Venerable is woman,
for she is your mother;
she is you sister;
she is your wife;
she is your guide;
she is your teacher;
she is your nurse;
and above all,
she is your angel. 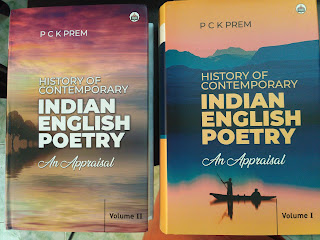