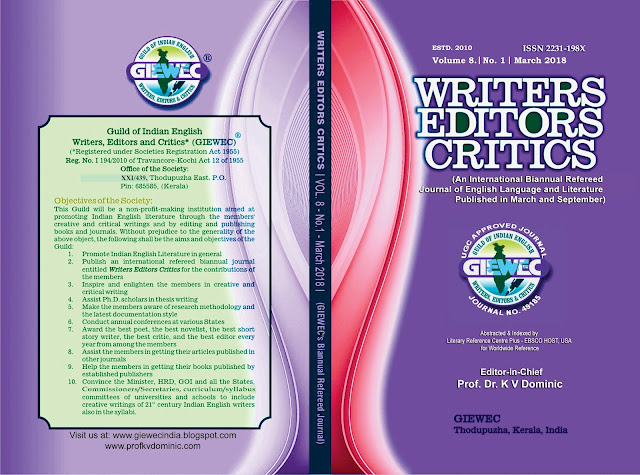 --Bhumika Sharma
Mahesh Dattani’s Tara: A Victim of Double Standards
--Nidhish Kumar Singh
Analysis of Woman Madness in the Kernel of Class, Gender and Race of Patriarchal White Colonialism in Doris Lessing’s The Grass is Singing

Kalidasa’s Kumarasambhavam and the Significance of Nepal as a Promoter of World Peace
Prof. Dr. K. V. Dominic
(Paper presented  at the 37th Annual International Conference on Mountain Literature held at Lakeside, Pokhara (Nepal) on 1-2 March 2018)

What a heart-bleeding eye-flooding
scene on the front page of newspaper!
Four month old daughter Meenakshi
shown her father’s frozen dead body!
Lance Naik B. Sudheesh meeting
his darling lone daughter for the first time!
Alas neither of them identifies each other!
What a depressing sobbing sight for mass assembled!
Tsunami of groans, laments, weeps and sighs!
Youth of twenty nine, Sudheesh had planned
to visit home on leave after a month
Could come a month before immersing all in tears!
Married Shalu, degree student three years back
Thus sacrificed his life for the nation along with
nine others in Siachen Glacier at Indo-Pak border
Were buried under thirty feet huge avalanche
Bodies could be recovered only after seven days
Thousands are still patrolling there
ready to die for their nation any moment
Siachen Glacier highest battle field on earth
Twenty thousand feet above sea level
Lowest temperature minus fifty degree
Average winter snowfall thousand cubic meters
Nothing lives there except Indo-Pak soldiers
Indian army controls area since 1984
More than two thousand soldiers
sacrificed precious lives for India and Pakistan
When hundred and fifty crores people
cozily sleep with family in both the countries
thousands of young lives are compelled to leave their family
to fight with merciless climate for no reason or gain
When thousands die of hunger everyday on either side
hundreds of millions are spent on this vulnerable place
Whose craze it is? For whom it is? People’s welfare?
People aren’t iron-hearted to see their patriots
suffer so sorely and sacrifice their precious lives
Let dove of peace fly over Indo-Pak borders
nay, borders of each and every nation
God, kindly sow seeds of peace, love and
compassion in the minds of all nations’ heads

Let me wind up my paper reinstating Nepal’s role as a promoter of world peace. As a member of United Nations Organization, Nepal has been helping the UNO in maintaining peace by sending its troops to UN Peace Keeping Force. The Nepalese Army and Nepal Police have been deployed in many conflicting areas of the world by the UNO as a peacekeeping force. Nepalese troops played a vital role to maintain peace in Kosovo, Lebanon, Somalia, Congo, Sierra Leone, East Timor and so on. Nepal has diplomatic relation with many countries of the world. Foreign policy plays an important role in making such relations. Nepal has made a substantial contribution to the UN peacekeeping operations since 1958 AD. The performance of Nepalese army in peacekeeping operations has earned a good reputation in the world. Nepal has made its identity as a peace-loving. It doesn't attack other but maintains friendly relation and follows the principle of neutrality with the countries of the world. It wants to establish a good relationship with every country and promotes world peace.

“The Beggar by Laxmi Prasad Devkota translated from the Nepali by Albert Harris.” Accessed 22 Jan. 2018.

Fanon, Frantz. The Wrteched of the Earth. Translated from the French by Richard Philox. Grove Press, 2004.