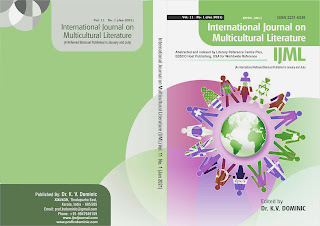 1. A Discourse Analysis of the Use of Code-switching

2. Woman and Nature: An Ecofeminist Study of

and Masks and Men: Stories 44

1. William B. Irvine’s the Stoic Challenge: A Philosopher’s Guide to

2. Rain Reveries of Recent Parlance: A Review of

9. Dominance of Myths and Superstitions 112 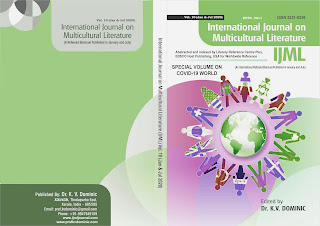 The Fictional Forte and Evolution of Social Vision as

Projected in the Fictional and Non-Fictional Works of V.S. Naipaul:

John Keats’s Letters: Dialogue between Self and Soul 17

K. V. Dominic’s “God’s Tribunal” as the Departure from the Reality 22

Community, Solidarity and Perseverance in the Times of Epidemic:

Sri Aurobindo as ‘The Pioneer of the New Age and

the Spokesman of the New Truth’: An Appraisal 36

Swami Vivekananda’s Religion as Man-making and

Spiritual Vision as Prophetic Tool Touching all Shores of

Dr. K. Balachandran’s For Whom Does It Rain? 52

A Critical Appraisal of Ishika Bansal’s Threads of Life &

My Diary and Other Poems 57

2. Planet Earth is closed for Repair 129

1. Coronavirus, Mightiest Wizard of all Times 170 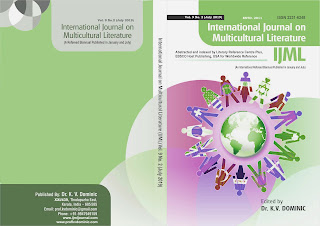 The Concept of a free democratic world and optimistic

vision of a perfect future as the essence of Whitman’s

Subalternizing Nature Towards Ecological Crisis in the

The Last Wave: An Island Novel 13

A Poet, Compassionate and Sensitive: An Evaluation of K. V.

Brij Bhalla’s The Cosmic Dance Waltz in Spheres of

Sri Aurobindo’s Poetic Capability to Arrive at a Knowledge of

Secret Things and Potentialities of Nature through the Spiritual

Language of Poetry: An Appraisal 52

‘The Gift of the Magi’ Using Linguistic Approach 67

History, Order and Transgression in Roy’s

The God of Small Things 72

Love and Gender Politics in As You Like It 86

When Love Plays Foul: A Feminist Perspective of

Timeless Women in Kavery Nambisan’s The Scent of Pepper 103

Stories Based on Real Incidents 115

K. V. Dominic’s Sanchita Karma and Other Tales of Ethics

and Choice from India 120

Sailing from Athens to Greek Islands 34

A Hamlet of Brahmin Widows 79 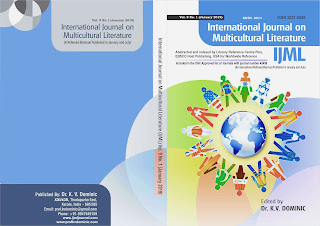 Rewriting History in Poetry: a Study of Mary Oliver’s 16

of the Subaltern Existence in Anand Neelakantan’s Vanara

Spiritual Humanism in the Selected Poems of 33

Exodus in the Dust Bowl Series of John Steinbeck 43

Deliberate Self Harm: An Insight into Stephenie 49

Eco-economy as a Solution to the Crisis Caused by 55

Portrayal of Social Life in the Novels of John Updike 63

Cow—A Wealth in the Ancient Indian Literature and 70

An Analysis of Bollywood Tawaifs as Subalterns

Scripting the Self: Traversing the Parallel Worlds in 105

A Clarion Call of Conscience

and Dilemmas: The Voice of an Exile

Ramesh K. Srivastava’s “Different from Others” in K. V. Dominic’s

(ed.) A Journey from Within to Beyond: A Bunch of Short Stories

EXPLICATION OF THE POEM

Education Scenario in India: A Few Limitations and their 130

The Great Hospitality, Scientific Advancement and

The Unheard Voice of the Sylvan Children:

An Interview with Tribals of Villupuram District 140

Every Time is the Right Time 142

Mother in Our Joint Family 154

A Glass Case of Emotions 155

A Fallen Piece of Paper 158

K. V. Dominic
Lord Venkateswara,
why have you called back
your dear bard so soon?
The spiritual epic, his masterpiece
turned out to be his swan song
It came out of the press just a few months back
Couldn’t you grant him some more time
to get feedback of this sublime book?
Gentle breeze would have brought to your feet
more rhapsodies from his lips
Renowned poet Professor T V Reddy,
you were our dearest President
Elder brother and mentor
Your departure without any notice
drowned us in the ocean of grief
Time can’t fill the chasm
Irreplaceable is your absence
Started your career as Lecturer of English
Proved eminent Professor, Principal, Emeritus Fellow
Author of 21 books--poet, novelist,
short story writer, critic, grammarian
Your distinct poetic style
meeting point of past and present
Combination of beautiful structured rhymed
poetry and well crafted unrhymed free verse
Rhythm as musical as ripples of brook
A rural muse of Tirupati, portrayed
beauties of landscapes, flora, fauna,
poor people, animals and birds
Sorrows and tragedies of people around
brimmed your eyes and flowed to paper
Exploitation and corruption of politicians
hurt your mind and composed
excellent lampoons and satires
Spiritual and pious to the core
superb philosophical, metaphysical
poems flowed from your pen
Professor Reddy, how humble and simple you were
Never showy, preferred to be mute in assemblies
Gentle and loving to anyone who meets
Inspired and guided younger poets and critics
Your talk on English poetry enlightened the audience
Lord Venkateswara,
don’t you see your bard
shooting rays on you like a star?
Still your bard is yet to be
prescribed in universities’ syllabuses
Don’t you want to spread your message
every nook and corner of the world?
Professor Reddy glitters like a gem
among sparkling poets of the world
As sun can’t be hidden by moon
we are sure, Professor Reddy
can’t be ignored by universities for long 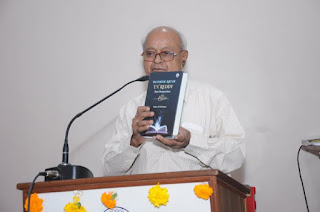 God save us from the pandemic

God: I am helpless

Man: Aren’t we your dearest?

God: It’s your ego tells you so

All my creations darling to me

Are we fated to live with mask?

For restoring our rights

A lesson for your conceit

Be humble and kind

What harm have we done to you?

Virus: you called us

Except you all are happy now

Reward for your crimes

Mask you wear is punishment

For masking in your lives

You punished for using cell phone

You wash your hands for survival

Pandemic is your own product

We are drowned in it

How ruthless you dynamite

Mother’s breasts that fed you!

River to her mother sea:

Threw his waste on me

Plight of human being:

Result of his karma

Bound to keep distance each other:

You are caged and we are free

Tit for tat, mind you!

"K. V. Dominic’s God’s Tribunal as the Departure from the Reality" by Prof. Dr. K. Balachandran

K. V. Dominic’s God’s Tribunal is a One Act Play which stands as a good example in Indian English literature for the departure from the reality.  Reality is one thing / aspect and departure is another.  Reality narrates one as it exists, prevails and functions.  Departure is a deviant one deviating for the present position/existence.  This One Act Play presents a complicated issue - man mishandling the problems on the earth, about which animals (cow, tiger), bird (cuckoo), Nature (tree), fish, the earth, why even women complain to God for justice. What are their complaints against man and how God reacts to them are truthfully narrated by the writer.  Has the earth become unlivable? Is the earth for human beings only? What are the problems in the human kind? Is man doing more harm than good? The 9 characters (God, Earth, Man, Woman, Cow, tiger, cuckoo, tree and fish) also present a deviant argument and picture which are lively and true. The paper presents a vivisection of the One Act Play and also a reality of departure – a novel portrait in words by the playwright.

Prof. Dr. K. Balachandran, Former Prof., Dept. of English, Annamalai University, Annamalai Nagar – 608 002 (Tamil Nadu), is a bilingual writer who has published 20 books (16 in English and 4 in Tamil) and a number of poems, research articles and reviews in India and abroad. A Gold Medalist from Annamalai University, he has won several awards. He has been serving as UPSC Examiner for the past 20 years. After retirement he has served as Dean and Principal in two colleges.